What is Hip Dysplasia in Dogs? 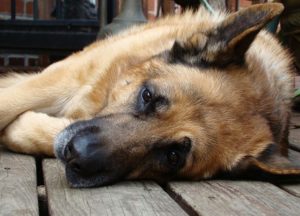 Hip dysplasia in dogs is a common canine disease, where the ball and socket joint in the dog’s hip is malformed.

A dog’s hip joint is composed of a ball and socket, which allows them the kind of range of movement they need for mobility. Under normal circumstances, the ball and socket joint moves smoothly while walking or running.

This failure of the joint bones to move normally will continue to gradually deteriorate as the dog gets older. This leads to limited range of motion, and eventually the loss of function of the hip joints.

Hip dysplasia is a common disease among dogs, especially with large and giant breeds such as German Shepherds, Great Danes, Labradors, and Saint Bernards. It can also occur in smaller breeds although more rarely.

Gender does not appear to be a factor as it affects both male and female dogs. What does appear to be a key factor is genetics, as some breeds are more predisposed to the disease.

The first signs of hip dysplasia may present while the dog is still very young, even as early as four months old. In some cases,  onset occurs later in a dog’s life, usually due to other skeletal problems such as osteoarthritis.

Symptoms depend on the degree of malformation and the duration of the disease. These include:

• Decreased activity
• Difficulty in rising
• Reluctance to run, jump, or go up and down stairs
• Weakness in back limbs especially after exercise
• Hopping or swaying gait
• Back legs are unnaturally close together when standing
• Pain in the hip joints
• Grating sound during hip movement
• Decreased range of motion in the hip joints
• Loss of muscle mass in thigh muscles
• Enlargement of shoulder muscles due to overcompensating for the lack of movement in back legs

If you suspect your dog may be suffering from hip dysplasia, bring the dog for a checkup as soon as possible. It will also help your veterinarian in diagnosing your dog’s symptoms if you can give them a thorough history, including overall health, symptoms, recent injuries or accidents. The history of the dog’s parents is  also very helpful information in diagnosing hip dysplasia.